2019 saw the continued promotion of robotic process automation (RPA) in the press with much of the coverage being overwhelmingly positive. With the growing popularity around RPA and its uses, a vast number of companies are now seeing RPA as an option for improving the performance of their business. Knowing the number of companies that have adopted RPA, now is an excellent time to take a step back and review how the technology is helping automate business processes.

As the number of companies in the UK, applying RPA to their processes grows year on year, some key questions need to be raised.

RPA, as a solution has several benefits that can help businesses and their processes.

Here are just a few examples:

These benefits are best achieved when an RPA solution is fully implemented into a business’s process over a period where clear progression is shown. Despite many examples of RPA usage not being to this scale, another advantage is that the application is very versatile, meaning all kinds of problems can be resolved. This versatility also means that the robotics installed can be amended to fit the specific needs of the business. 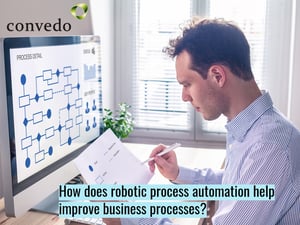 To get answers to the questions raised earlier, firstly, it must be defined how the RPA solutions are being implemented into the businesses. Taking a step into the automation world can be a daunting prospect for business owners, as with any business change, there is a fear of the unknown. However, if used correctly, applying RPA can offer a considerable ROI while maintaining the security of data. Regarding the financial aspect of the business, cutting staff costs can only be beneficial, but in reality, business owners are rightly sceptical of potentially having to lay off staff members. RPA looks to balance the two issues by maintaining staff while saving money. AT the same time it empowers staff by allowing them to focus on more value added tasks. To see how this works, the application of the software to a process must be assessed.

The usage of RPA can be categorised in two ways.

With a stop-gap approach, there is little risk involved, but subsequently, the results will initially only see minor benefits. An example of such implementation would be an RPA tool being downloaded to automate the capture and data entry of incoming data. Rather than having a human working to enter the data received manually, the robot installed would recognise the data and classify it. This type of implementation has been prevalent with business leaders looking to try the technology out before fully enrolling it. Having a stop-gap approach does not remove the need for human workers, but instead makes those workers lives easier hence increasing productivity and staff morale. This type of implementation is also cost-effective as the robotics can be installed onto the existing hardware. Robotic Process Automation is a non-disruptive technology that does not have any impact on the existing applications.

By approaching it from a strategic process automation point of view, the levels of risk and reward increase hand in hand. Also, the transition to get to a full system process automation requires the entire workforce to be briefed and onboard with the changes. Without full cooperation from staff, the chances of the solution not working to its full potential is increased. A lack of assistance from staff is unlikely but making changes without pre-warning can cause issues further down the line. No doubt looking to change your businesses whole processing approach comes with some form of risk. However, when used in the right way, the benefits your business will see regarding productivity and return on investment will be enormous. With this approach, there are several benefits that the company will see:

Cost of software ownership is optimised

Most enterprise scale implementations are done via Centre of Excellence which helps the rpa expertise to be used across the organisation.

Standard application of compliance and governance policies is easy

Whether it is being used as a stop-gap to resolve repetitive processes, or implemented as a strategy to transform a company’s operation, RPA is flexible in the benefits it can offer.

RPA can be applied to various processes.

A clear example of this can be seen in a simple complaints process.

One company’s process saw incoming complaints received via email, phone and their online portal. No RPA solution was built in meaning that despite much of the data already being on the IT systems, all the data for each complaint had to be extracted manually by staff members. Once a complaint was raised, the staff had to respond asking for details relating to the complainant as well as the desired resolution.

Because there is no automation for the complainant to define what the specific issue is, the staff must follow up themselves. As there is no automated response to confirm the complaint has been received, the team must also advise again manually when they can to provide an update. This, in turn, leaves a potential risk of human error, e.g. sending incorrect information or forgetting to post updates. Though unlikely, a mistake like these can cause significant damage to the overall customer experience. This risk is, of course, heightened at times when the number of complaints rises or if staff are absent.

Whether it was just a stop-gap or a system overhaul, this process could benefit massively from an RPA tool being implemented. For example, there could be a bot installed at the initial stage of the complaint where the customer can enter their details and specify their claim using a dropdown menu. Defined as a stop-gap solution, this minor change would immediately reduce the time staff would have to spend allocating the issue. A similar bot could also be installed to provide an update to the complainant automatically. This would keep the customer satisfied in knowing that the complaint is being reviewed for a response. These two examples of simple bots would remove the repetitive, error-prone tasks from the staff, saving time and allowing the focus to be placed on tasks that require staff knowledge and experience.

This example is just one of the many processes that can be improved by RPA. Having seen the ease in the transition of such processes, companies across many industries are moving quickly to see how they can jump on board with the RPA success.

Along with RPAs success and flexibility, the technology is continuously evolving and being combined to create even more advanced automation solutions such as Intelligent Automation. Described as the next-generation RPA platform, Intelligent Automation can execute workflow orchestration, mobile capture, analytics, eSignature and digital messenger. Such innovations have seen predictions for RPAs value soar, with the industry expected to be worth over $3 billion by 2025. It is a space that has grabbed the attention of industry giants and is passing all industry tests with flying colours.